Country-specific case study on assessment of lead pollution levels in Belarus in 2012 is completed. This work was carried out in close cooperation with national experts form Institute of Natural Management of National Academy of Science of Belarus (INM). The experts from Belarus submitted a set of necessary input data for the work, including national emissions with fine spatial resolution (10x10 km2) and splitting to source categories, measured concentrations of lead in air at background station ‘Berezinskiy Reserve’ and at urban stations in Belarusian cities, and concentrations of lead in soils. The results were jointly analyzed by experts from Belarus and MSC-E.

The highest contribution to deposition in Belarus from national sources came from emission source category ‘Iron and Steel Production’ (46%), followed by ‘Combustion in industries’ (21%),  ‘Electricity and Heat’ (15%) and ‘Other Chemical Industry’ (8%). However, the regional differences in contributions were substantial. The largest contribution of ‘Iron and Steel Production’ was noted for the Homel region (71%). ‘Combustion in Industries’ group was the main pollution source in the Grodno region (53%). The highest contribution of ‘Electricity and Heat’ and ‘Other Chemical Industry’ took place in the Vitebsk region (30% and 21%, respectively). 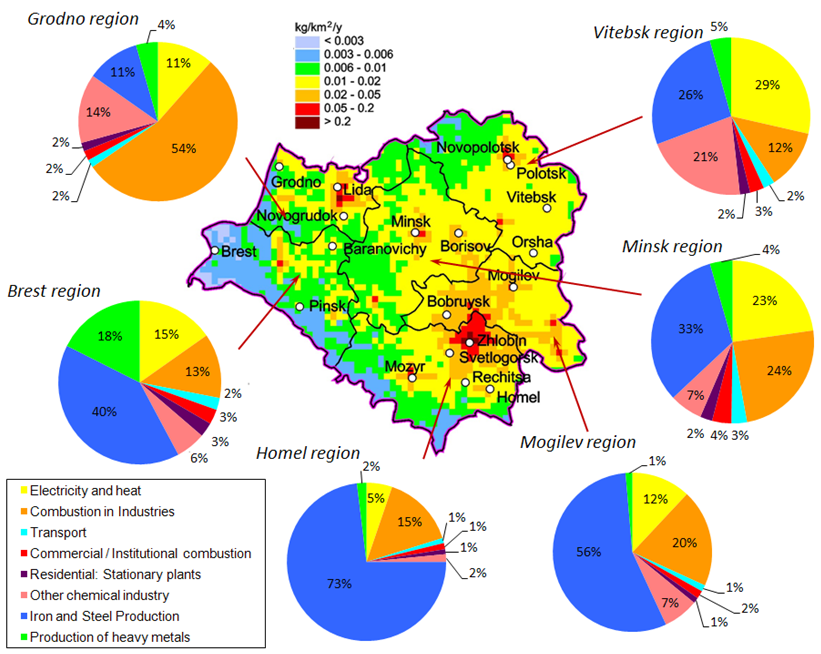 Deposition of lead in Belarusian capital cities in 2012 from different sources (left) and relative contribution of city, foreign and national external sources to anthropogenic deposition (right)

The comparison of modelled and observed air concentrations at the national background monitoring station ‘Berezinskiy reserve’ demonstrated that the observed levels were underestimated by the model. Possible reasons contributing to this discrepancy included uncertainties of the model, underestimation of the emission data and uncertainties of measurement data. For the analysis of heavy metal emission data in the EECCA counties joint efforts of national emission experts of these countries together with CEIP and TFEIP are required. Besides, in order to improve quality of measurements in the EECCA region, participation of national laboratories in the regular intercomparisons under the CCC supervision is appreciated. Finally, additional direction of the research could be focused on investigation of other pollutants in Belarus. It could help to understand if the considered situation is unique for lead or it is typical for other pollutants, for example, particulate matter or acidifying compounds