Assessment of cadmium atmospheric pollution levels in Poland in 2014 has been completed. The work has been carried out in close cooperation with national experts. The assessment includes analysis of national emission and monitoring data, model-based source apportionment in particular Polish voivodships and pollution in the selected cities. Modelling was carried out with spatial resolution 0.1°x0.1° using the latest verion of GLEMOS model.
Modeling results based on official and national emission data were compared with concentrations in air observed at EMEP and Polish stations. In was found that the model tended to underestimate the observed levels in cold period.  Analysis of factors responsible for seasonal changes of pollution levels led to conclusion that the identified discrepancies were linked with possible underestimation of cadmium emission from sector ‘Residential Combustion’.
In order to improve the model performance and to provide the national experts with the results which better agree with measurement values emission scenario has been developed. The suggested emission scenario assumes higher emissions in the southern and south-western part of Poland in cold period.

The usage of higher emissions from residential combustion sector resulted in the improvement of agreement between modelled and observed concentrations in air in cold period. For the warm period the differences are negligible because the scenario assumes the increase of emissions only in cold period.

The main emission source categories in Poland include ‘A_PublicPower’, ‘B_Industry’, ’C_OtherStationaryComb’ (residential Combustion), ’D_Fugitive’ and ‘F_RoadTransport’. Model calculations were done for these five sectors, and emissions from the remaining categories were grouped into ‘Remaining sectors’. Contributions of these sectors as well as foreign sources to anthropogenic deposition in Poland were calculated for a country as a whole and for its particular voivodships. The main contributors to cadmium deposition are sectors Industry and Residential Combustion. 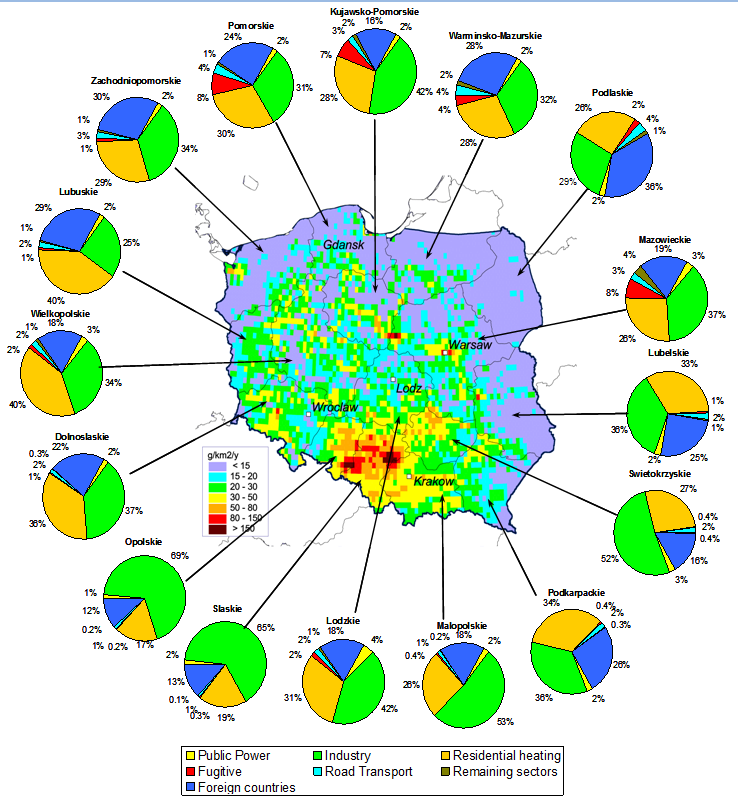 Special attention was paid to evaluation of pollution in cities of Poland. Although the model has not been designed to simulate urban-scale pollution levels, the calculated annual mean concentrations agree with the observed values for most of the selected Polish cities. Spatial correlation coefficient is 0.71 and relative bias is -8%. 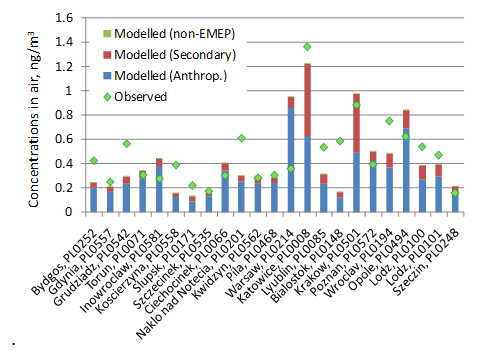 Seasonal variability of the observed concentrations was also reproduced by the model. Correlation coefficient between averaged over stations values is 0.95. For most of stations the correlation between modelled and observed monthly mean values is higher than 0.6. 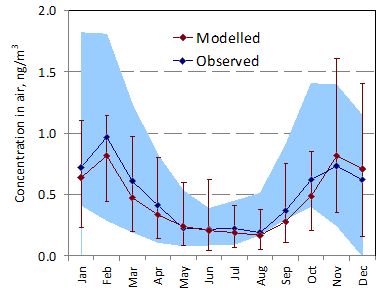 Averaged over stations monthly mean modelled and observed concentrations. Range of concentration values within limits 10th – 90th percentiles is denoted by blue area for observed and by whiskers for modelled values.

Concentrations of cadmium in air in Polish cities are presented as a sum of two components. The first one comes from anthropogenic sources outside city area (external) and the second is produced by city sources (urban increment). In large cities such as Warsaw, Krakow, Gdansk, Katowice, Poznan city sources contribute significant (20 – 70%) faction to anthropogenic concentrations. In other considered cities the fraction of city sources is relatively small making up from 1-2% to about 10-15%.

Calculated concentrations of cadmium in air caused by anthropogenic sources outside city (external) and by city sources (urban increment).

Calculated seasonal changes of urban increment were compared with those based on observations in cities located in the north-western part of Poland. In a number of Polish cities seasonal changes were captured by the model. Both modelled and observed values of the urban increment exhibited higher levels in cold season and lower values in warm season.  At the same time, the model failed to reproduce the measurement-based increment at some other cities, which was connected with underestimation of Cd emissions from the ‘Residential combustion’ sector.

The study demonstrated that the model can be used as a tool for evaluation of national emissions. Using modelling and observed information it is possible to identify regions where emission may need further improvement. However, this activity requires close cooperation with national experts and relevant EMEP centres and Task Forces.

Available official or national emission data contain uncertainties which affect results of assessment of pollution levels. The usage of emission scenarios or expert (non-official) emission estimates can produce more realistic, from viewpoint of comparison with the observed values, alternative results of pollution levels assessment. These alternative results could be presented along with the results based on official emission data.