A case study of heavy metal pollution in Germany is performed jointly by EMEP/MSC-E and the German Environment Agency (UBA). The main objective of the study is generation of detailed information on levels and spatial distribution of air concentration and atmospheric deposition of three heavy metals – Pb, Cd, and Hg – over the country’s territory for the period from 2014 to 2016. Results of the study will be used by UBA for integrative evaluation of available information about heavy metal pollution of various ecosystems (e.g. for comparison with metal concentrations in mosses) and for subsequent risk assessment. The work is funded jointly by EMEP and the country (UBA, Germany).

Variety of detailed national scale data have been prepared and provided by German national experts (UBA) for the aims of the study. Information on anthropogenic emissions of Pb, Cd and Hg in 2014, 2015 and 2016 is prepared with spatial resolution 0.1°x0.1° and vertical height level information of the model. Information on measurements from six EMEP stations located in Germany is involved in the study. Besides, measurements of air concentration and wet deposition of Pb and Cd are available from about 120 measurement stations from national monitoring networks. Information on Hg wet deposition fluxes is reported by 65 national stations. In addition to this, national data on land-cover, soil texture and concentrations of heavy metals in soils have been collected.

The model simulations of heavy metal atmospheric transport and deposition over the territory of Germany were performed with the GLEMOS model. A number of the model updates have been performed to adapt the national data and fit the model to the needs of the study. These updates are related to meteorological information, wind re-suspension of Pb and Cd and natural emissions of Hg. In order to take into account influence of national, regional and global sources on heavy metal pollution levels in Germany a multi-scale modelling approach was used.

The fine resolution modelling on national scale provides detailed patterns of heavy metal pollution in the country. The highest concentrations and deposition levels of all three metals are predicted for the western provinces because of large impact of anthropogenic emissions (Fig. 1). Beside the western part of the country, elevated deposition levels are also characteristics of the eastern and southern provinces. Deposition patterns of all metals are more mosaic than distribution of concentrations due to spatial variability of atmospheric precipitation and characteristics of the underlying surface. Among various ecosystems, forests and other areas covered with high vegetation are the largest receptors of heavy metal pollution.

Fig. 1. Spatial distribution of Pb (a), Cd (b) and Hg (c) wet deposition in 2015. Circles show the EMEP observations and squares present German national measurements in the same colour palette.

Measurement data from national monitoring networks significantly expand the scope of the analysis. However, observations from some monitoring stations may not reflect background pollution levels (e.g. due to effect of local sources) that complicates their use for evaluation of the modelling results. Therefore, more detailed information on the methodology and sensitivity of measurements as well as on the physical conditions (such as geographical height, exposition, land cover) and pollution level/local sources in the surrounding of the monitoring stations would be needed to improve their applicability for evaluation of modelling results. Nevertheless, for most of the national stations the satisfactory agreement between modeled and observed values is found. For 65 – 75% of national stations a difference between modelled and observed air concentrations or wet deposition fluxes falls within a factor of two (Fig. 3).

At a number of national stations the model also well reproduces seasonal variability of the observed levels. Modeled and measured time series are illustrated by Hg wet deposition (Fig. 4). Wet deposition of Hg at these sites is higher in summer and lower in winter indicating predominant role of the photooxidation chemistry. The modelling results also demonstrate relatively small contribution of national emissions to Hg deposition in comparison with long-range transport from regional, non-EMEP and secondary sources.

Fig. 4. Comparison of simulated and observed monthly Hg wet deposition at German national stations DESH046 and DESH054 over the period 2014-2016

Refined national emissions inventory for heavy metals and updates of other input information favour general improvement of the model assessment in comparison with previous EMEP operational modelling. Finer spatial resolution of emissions data allows more detailed evaluation of pollution patterns and leads to better agreement with observations. Even though the model performance does not change significantly over the whole territory of the country, it demonstrates considerable improvement in individual provinces or particular locations. For example, modelled Pb air concentrations based on new results are markedly improved compared to the previous operational modelling results in the Baden-Wuerttemberg province (Fig. 5). Besides, both spatial correlation and the relative bias of Hg wet deposition with respect to the measurements are considerably improved in the new results (Fig. 6).

Fig. 5. Modelled and observed concentrations of Pb in air at stations in Baden-Wuerttemberg province 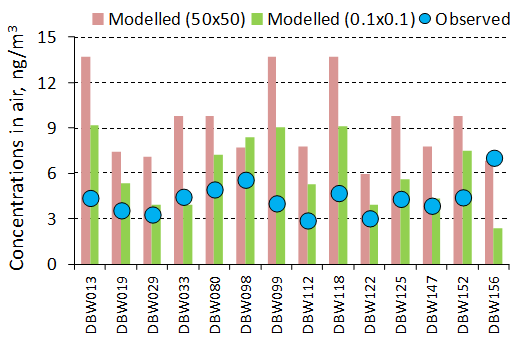 Fig. 6. Comparison of old and new simulations of Hg wet deposition with observations (a) and change of relative bias

Evaluation of the simulated country-scale patterns of heavy metal pollution against national monitoring data and measurements in moss reveals discrepancies in some locations or provinces of Germany, particularly, in the western part of the country. A number of sensitivity tests were undertaken to investigate reasons of the discrepancies between modelled and measured levels. Performed analysis showed that the differences between the modelled and measured data can result from:

As shown, the country-scale assessment of heavy metal pollution for Germany identified a series of starting points for further in depth analysis by German experts in order to improve the knowledge about atmospheric pollution by Pb, Cd, Hg as basis for national risk assessment. Close cooperation of German experts with experts of EMEP/MSC-E is recommended to foster the overcoming of remaining discrepancies and clarification of still open questions.