Information about emissions with fine spatial resolution in the Netherlands in 2007 was presented by the Dutch experts. It amounted to 44.7 tonnes and included emissions from 22 source categories. The most significant emissions (around 65% of the total) belonged to the category ‘Irion and steel production’, and almost all emissions from this category were presented by one large point source (LPS) ‘Corus Staal BV’ located in the west from Amsterdam. 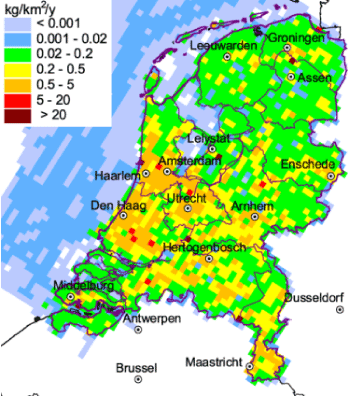 Lead emissions in the Netherlands in 2007 with resolution 5x5 km2.

Spatial distribution of lead pollution levels over the Netherlands is not uniform. The highest air concentrations (more than 30 ng/m3) and deposition (more than 4 kg/km2/y) levels are noted for the province Noord-Holland. The levels in this province are caused mostly by LPS ‘Corus Staal BV’. According to available emission inventories it contributes more than 60% to total national emission of lead in 2007. 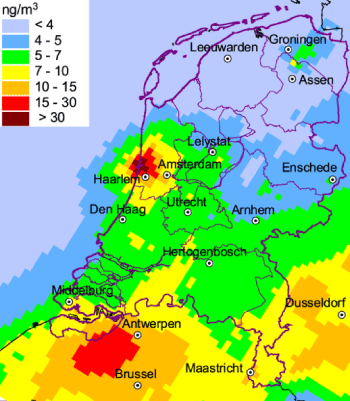 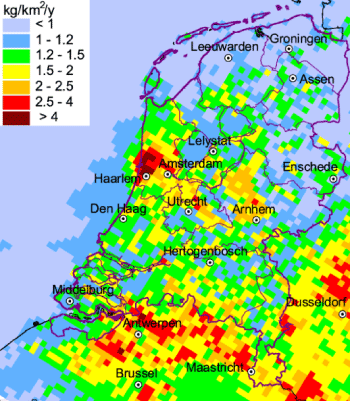 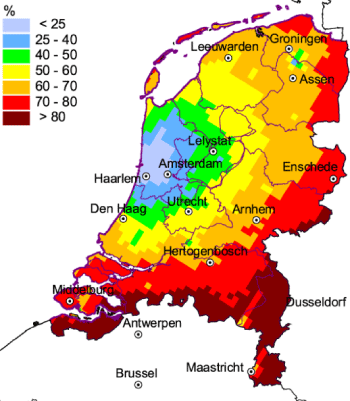 From 5% to 12% of lead is deposited to a territory of a province where it is emitted, and from 4 to 19% - to the other provinces. The most of lead (72-90%) emitted in the Dutch provinces is transported through the state borders to other countries. For the country as a whole 19% of emitted lead are deposited to the country’s territory.

Fractions of lead emitted in the Dutch provinces and deposited to territory of a province, to other provinces of the country and transport abroad